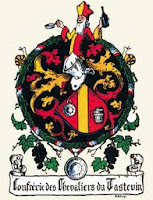 We are excited to announce Treos partner/winemaker Dave Jepson has been inducted into the Confrerie des Chevaliers du Tastevin -- an organization of avid Burgundy wine lovers. Dave has been a collector and enthusiast of Burgundy wines for many years, and this induction marks the attainment of one of his major "life goals" (as was also being part of establishing TREOS wines).

Originally founded in 1703, and revived under its current name in 1934, the Confrérie des Chevaliers du Tastevin (Fraternity of Knights of the Wine-Tasting Cup) is an exclusive club of Burgundy wine enthusiasts. It is headquartered at the twelfth-century Château of Clos de Vougeot in Burgundy, but maintains chapters worldwide. Along with just a small handful of other Oregon wine producers, Dave is now a member of the Oregon chapter of the Confrerie.

The Confrerie currently has some 12,000 Chevaliers worldwide including wine producers, noted restaurateurs, business executives, heads of state, politicians/diplomats, and noted celebrities including scholars, athletes, musicians, and artists. The Confrerie's primary intentions are to hold in high regard and promote Burgundian wines and cuisine, to maintain the traditional Burgundian festivals, folklore and customs, and, to encourage people from all over the world to visit Burgundy.

Please join us in congratulating Dave on becoming a Chevalier du Tastevin member. 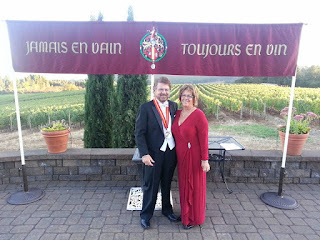 by Paul Gregutt
Albariño is rare enough in Oregon, but virtually unknown in the Willamette Valley. This estate-grown wine, from a vineyard in the valley’s southwest corner, makes a solid case for more. Tart and tangy with brightly defined flavors of grapefruit, apple and pineapple, this is deliciously bracing. There’s nothing simple about it; the flavors extend and expand through a wonderfully long finish.
— (10/1/2015) — 91

http://buyingguide.winemag.com/catalog/treos-2014-albarino-willamette-valley
Posted by Treos Wine at 10:47 AM No comments: 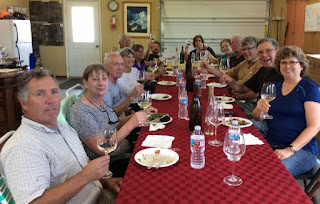 We were excited to have a number of our wine club members join us for a day of harvest.  Because they are special to us...we made them TREOS Employees for a Day!!

We all enjoyed a special lunch, along with fabulous, current and library TREOS wines, after a great morning of picking grapes.

Thanks everyone for coming out on Sunday September 13th!!  A grand time was had by all!!

Posted by Treos Wine at 4:34 PM No comments:

Rhapsody in the Vineyard...Saturday September 12th

Rhapsody in the Vineyard

Come to Corvallis to enjoy a beautiful afternoon tasting wine.   We'll be pouring some great TREOS wines at:

Posted by Treos Wine at 8:06 PM No comments:


The Harvest has started! We started picking the earliest on record for us...first day was September 9, 2015.

Posted by Treos Wine at 2:44 PM No comments: